Rocking iPhone/iPod Devices for your Home, Office & More at iHome!

I’d always wondered what those old ’30s- and ’40s-era monster movies would have been like, seen on the big screen in all their glory in a darkened theater. This is pretty close.

Lawrence Talbot (Benicio Del Toro) is called home, away from his theater in London to his grim family estate in Blackpool. His brother Ben vanished on the moors one dark, moonlit night and his distraught fiancee Gwen (Emily Blunt) wrote him a letter pleading for him to return and help find Ben. He arrives only to find his father (Anthony Hopkins) has bad news. Ben is dead, apparently the victim of a brutal killer. Lawrence resolves to find out what happened to Ben, and travels across the moors. At night. Alone.

This thing even bypassed the don’t-go-looking-for-what’s-making-the-noise-alone rule. Lawrence clearly loved his brother, nobody else seemed particularly interested in helping him, and if something made my brother look like that, I’d be out for some blood myself, all five feet of me. One criticism I read that I didn’t get was the claims he laughed at the “rubber wolf suit”. I don’t know what this person was smoking; this looked just like the old Universal Studios wolf man we knew and loved, only better make-up thanks to Rick Baker. It took a little bit of time for this thing to get going but once it did, it was great. If my word isn’t enough, Mr. Shukti, who usually grudgingly goes to monster movies with me and laughs at them, loved it. 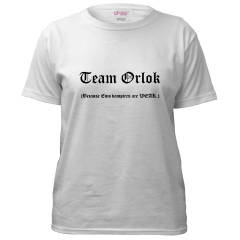 For all of you old school vampire fans cringing at the next Twilight movie: a way to say how you really feel. Team Edward? Team Jacob? Why not pick one of the first and scariest teams?

No glitter. No pretense. Nothing fancy. GreenEyezTz.